Up to the mountains and down winding roads.
We’re now a day closer to the end of the road.

Picking up from that same day in Wyoming from my last post.

Left Scott and Charissa’s that afternoon and started the 6 hour drive to Utah. We stopped to do gas and picked up some burgers at a burger place. I don’t remember the name of it but we waited a while in the drive through because they started making our burgers right after we ordered it. It was around $20 for two people. I wasn’t the best burger I’ve had but it was certainly filling.

When we crossed the border from Wyoming to Utah you could see the difference. The landscape went from flat plains and hills to mountains. Half the time we were driving along the mountainside. It got a lot more green and rocky as we went up and down the winding roads and over gorges.

I was naive to think that we wouldn’t get caught in the dark but at the same time, I was in awe of the clear skies. Even though it was dark and we were in unfamiliar terrain, I felt as if I could drive for hours. The view was breathtaking. I could see every single star in the sky. Everything felt so close. Like I could reach up and touch the night sky.

When we finally got to our exit, I started to pull off the highway to take the ramp a coyote jumped out of the bushes in front of our car. I slammed on the breaks and scared my half awake dad. Neither of us has seen a Coyote. That was when I truly knew that we were in the west. It’s almost as if Utah was welcoming us.

The coyote ran off but not before giving us a full stare down. We continued down the ramp down to the streets of Ogden. It was a bit nerve racking because even the streets of Ogden go up and down hills. I felt strange taking steep hills while going 30-40 miles per hour and then having to stop at a red light while not being completely horizontal. At last we arrived safely at our Airbnb and went straight to bed.

We left Ogden the next morning and drove down to the Zion National Park. I’ve heard so many good things about it. From my friends back home to Ally from @thevillecrochet who posted about her trip to Zion which inspired me to add this as a stop to my road trip route. Here’s a vlog by Ally’s husband Luke about their trip to Zion

It was a 5 hour drive from Ogden to the entrance of made it to the park by 3:00 pm. This would be our first time hiking. My dad didn’t have any hiking or work out clothes so we had stopped by a Walmart back in Nebraska when we were on our way to Wyoming to purchase an outfit. My dad has taste yall. His outfit matched perfectly and was great for hiking.

Here’s what you need to know when visiting Zion.

When we got in and parked we went to the visitor center and got the 411 from a worker. After she called us up these were the words that came out of my mouth, “We’re from Florida and we have never hiked before. Please tell me everything we need to know.” She was unfazed and very helpful. She taught us how to read the maps, how the shuttle bus routes works, how to reach the beginner hiking trail, and even answered the question of what shoes to wear. She was very helpful, friendly, and really put us beginners at ease. We thanked her and set off.

Armed with knowledge, we took the bus to a beginner hike called Riverside Walk. We got dropped off by the bus and took the path leading to the trail. We got to a fork where one path led to the hiking trail the other led to a river. We’ve haven’t seen a river in the mountains before so of course we went to go check it out. It was amazing!

After exploring the riverbed we went back up the path and started the hiking trail.

I have never been hiking before so when I heard the term beginner hike I thought it was for me. Even though the worker used terms like, paved path, and only a mile long. Y’all, I thought a paved path was a sidewalk in the middle of nature. The hike was hard but the sights were amazing. It’s funny that I say it was hard because there were quite a few senior citizens doing the trail as well. It was so cool seeing them all decked out in their hiking gear. It made me feel like going out and buying all the hiking gear.

The squirrels along the path didn’t hide at all. In fact they came out expecting you to give them food. I guess that’s what happens when they get used to having humans around, consistently.

There were a few parts of the hike where you could leave the trail and hike along the river bed. I did go down to explore those parts but I chose not to hike along the bed. Reason being, I was wearing Converse and those don’t go well with slippery rocks; not enough traction.

At another point of the hike, we reached another fork in the path. One way was for the rest of the hike the other way led down to a river. There were several people resting there and another group of people walking across the river. I know it was summer but I felt cold for them. Apparently in hiking you have to be prepared for multiple terrains but that seemed really intense for me. But then again I’m just a beginner. What do I know?

After hanging out in that area for a bit, we turned around going back the way we came. It was starting to get late and we were getting hungry. We hopped on the bus and hopped off at the Zion lodge. There was a trail on the other side of the road so I decided to take a look before grabbing a bit. I told dad I would meet him later.

I ended up hiking to the Lower Emerald pools. The view was amazing.

When I returned to the Lodge there were about a dozen deers grazing in the fields!

There was a sight that I really wanted to visit. When we took the bus back to the visitor center I hopped off in various different trails hoping to find what I was looking for. It probably would have been easier if I had asked a ranger but the excitement of the hunt kept me from doing so. It was like a puzzle I needed to solve. In the end, I didn’t reach the place I wanted to but I did get to go down an unmarked trail and get some photos.

All in all the Park was fun. I am bummed out that I didn’t get a chance to see the canyons. But I’ll be living closer to Zion so I could always come back. Shoutout to my dad who makes friends wherever he goes. When I got back from the Emerald pools he was having a full blown conversation with European tourist.

We headed back to the car and drove to Cedar City, where we were staying for the night.

We finally got to our Airbnb (after dark of course.) Our host was a lovely couple with two small dogs. After setting our bags down we went out and had something other than a burger… it was pasta. We had asked our host about the places to eat in the area and they recommended an italian restaurant. It was only five minutes away and the wait time was relatively fast. During dinner, I learned that my dad is not a picky eater. He was fine with whatever I ordered for him and thank me for picking a place that wasn’t a burger joint. (As I write this months later I really want to have a burger today.) After dinner we turned in for the night.

I couldn’t sleep, even though I was beyond tired. Just the thought of the next day left me feeling a ton of emotions. Relieved, that this trip was going to be over because I needed a break. Excited, to see what God was going to do. Stressed, because part of me felt the need to have to figure things out. As a result of all my feelings I had a very restless night. By 5:00 am I submitted to just staring out the window and breathing. I couldn’t believe this was happening. I couldn’t believe that I took a leap of faith not knowing where my feet would land. It was intense and the only way I could justify it to myself was the simple truth of,

But I know that God is good. – Olguine Brutus

When the sun rose and I got up and took a shower. It felt normal since that’s what I’ve been doing for the past week. It also felt surreal that today would be when my journey would come to an end. I have crossed the Red Sea and now I go forth towards the land of promise. Now I’m in the wilderness, literally. But God told me that I would abound here because I chose to go with him into the unknown.

I wrote this poem a week before I left Florida and I thought I would share:

I’ve gone out like Abraham, away from family
but I must be careful, not to be like the Israelites when they came out of Egypt
Because the Lord will indeed deliver me,
to the land that he promised me.
And when I get there I cannot be concerned with all the giants I may see.
Because I trust that God is still with me.
And remember what he promised me.
That he will always and forever take care of me.

Before we left Cedar City our host made us coffee and we chatted for a bit. It was quite interesting. They treated us like we were family and invited us back to stay. I hope I can meet the same kind of love when I get to Los Angeles.

Read more about The Mountains are calling & the National Parks series.

Thanks for reading! Tell a friend if you learned something new, felt inspired, or just enjoyed reading my story. Exploration posts come out every other Friday. In the meantime, check out my upcoming destinations, join the journey by subscribing to our newsletter, and support OMK by making a donation below. Until next time!
– Olguine Brutus

Processing…
Success! You're on the list.
Whoops! There was an error and we couldn't process your subscription. Please reload the page and try again. 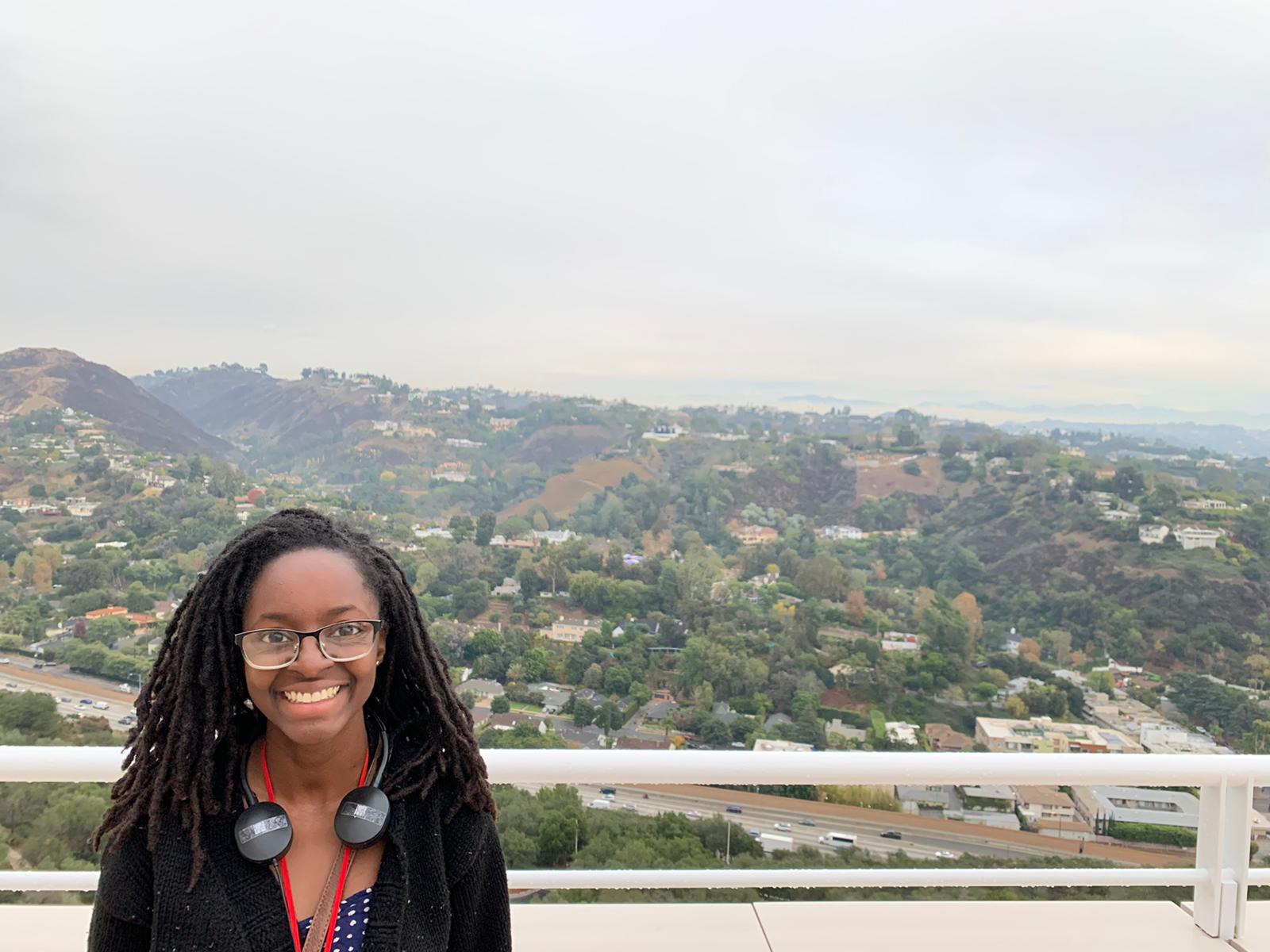 Just a girl and her yarn, going with God. View more posts